As COVID-19 continues to disrupt a third academic year for thousands of college and university students -- resulting in a 3% decline in undergraduate enrollment in fall 2021 -- more Americans are questioning the value and viability of completing a four-year degree. This is likely to be particularly true for adult learners: In a recent study, Gallup found 47% of parents who dropped out of a postsecondary program did so because of childcare responsibilities, and 30% dropped out due to program costs, both of which have been exacerbated by the pandemic.

For 25 years, Western Governors University has been committed to delivering an online, competency-based education that allows students -- particularly those from underserved populations, including parents, students of color and first‑generation college students -- to complete their degree on their own schedule, and at their own pace.

Currently, WGU students graduate at higher rates than their peers at comparable institutions and are half as likely to default on their student loans. 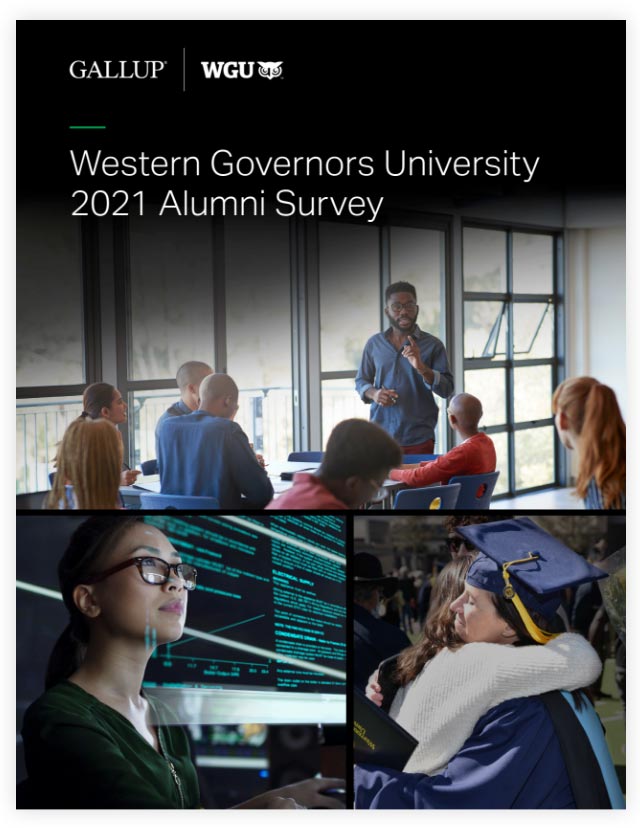 This report looks at the more than 1,200 WGU alumni Gallup surveyed who completed their program between 2016 and 2020 to measure how WGU's most recent graduates are faring in comparison to bachelor's degree holders nationally. The survey collected feedback on graduates' experiences while enrolled as students, as well as critical postgraduation metrics like employment and wellbeing. When their outcomes are compared with those of more than 1,000 national bachelor's degree holders from the Gallup Alumni Survey, WGU alumni are thriving at significantly higher levels than their peers.

Results from this study are based on 1,238 web survey responses from Western Governors University alumni who received their undergraduate degree between 2016 and 2020. Gallup conducted the survey from Nov. 17-Dec. 12, 2021. Western Governors University provided the sample of alumni email addresses. Alumni were included in the study if the institution had an email address on file.

All reported margins of sampling error for the Gallup Alumni Survey include the computed design effects for weighting.