Climate Change and Wellbeing Around the World

Download Report to learn more about Climate Change and Wellbeing

While much is known about the environmental and economic effects of climate change, there has been less systematic analysis of how rising temperatures affect quality of life around the world.

This analysis represents a preliminary effort to quantify and track the impact of rising temperatures on people's lives by combining geospatial Gallup survey results from 1.75 million people in 160 countries with daily, high-resolution temperature data from NASA.

The findings show how objective weather information relates to subjective data on how people around the world evaluate their lives.

The findings from the Climate Change and Wellbeing Around the World report provide new insight into the significant negative impact rising temperatures have on global quality of life. They also quantify the overall human toll, beyond financial impacts, climate change has had on people's lives over the past 10 years.

Download Now to read the Climate Change and Wellbeing report 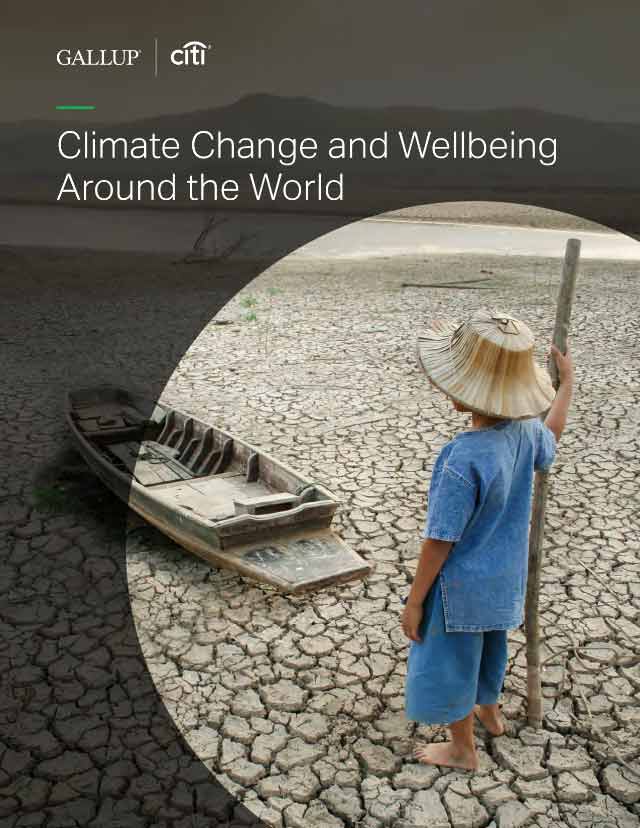 In a typical year, the Gallup World Poll covers more than 140 countries and areas and more than 98% of the global population. The World Poll questionnaire includes more than 100 questions spanning many aspects of people's lives, from overall wellbeing measures to specific issues like access to food and shelter, the availability of essential services such as education and healthcare, and confidence in national institutions.

In most countries, Gallup interviews nationally representative samples of about 1,000 adults each year. Gallup uses telephone surveys in countries where telephone coverage represents at least 80% of the population. In more than 100 lower-income countries, including much of Latin America, the former Soviet Union countries, most of Asia, the Middle East and Africa, data are collected face-to-face in randomly selected households. In these countries, Gallup has captured the GPS coordinates of each interview since 2016, providing precise information about respondents' environment and geography. For the current analysis, Gallup used these GPS coordinates to test the extent to which temperature data precision matters when studying the impact of climate change on wellbeing.

The results in this report are based on Gallup World Poll respondent-level data from 2006 to 2020 in 160 countries. This data represents about 1.75 million respondents interviewed over the course of those 15 years. Information about the respondents' location (either country administrative divisions or GPS coordinates) is matched with daily, high resolution land surface temperatures from NASA's MERRA-2 database. Specifically, the analysis tests for relationships between respondents' life ratings and the number of days in the 30 days prior to the survey with unusually high daytime temperatures where they live.

In this study, Gallup merged NASA MERRA-2 daily temperature data from 1980 to 2020 with the World Poll data. "High-temperature days" are defined as days on which the temperature in a given location is 1.5 or two standard deviations above the location's mean temperature during a historical reference period, which is derived using aggregated NASA MERRA-2 data from 1980-2004. This approach follows previous analyses that examine relationships with heat anomalies relative to baseline levels in investigating the effects of rising heat on wellbeing.

This study is a novel attempt to explore the relationship between rising temperatures and life evaluations. Yet, the relationships and associations mentioned in this report do not imply causality. Further research is needed to explore the mechanisms through which climate change impacts individuals' livelihoods.

Read the Climate Change and Wellbeing Around the World press release to learn how high temperatures are related to wellbeing.

Read Report Press Release to learn more about the report
6.5% Rising temperatures have decreased wellbeing by 6.5%.
3x People faced 3x more "high-temperature days" in 2020 than in 2008.
3x Compared to 2020, climate projections indicate that declines in wellbeing could triple by 2030 due to high-temperature days.