The economic benefits of a tech-savvy workforce

As the world grows increasingly digital, information technology is driving significant global transformation for individuals, organizations and countries. To study these dynamics in a global context, Amazon Web Services (AWS), in collaboration with Gallup, conducted one of the largest international surveys to date on digital skills.

Gallup surveyed more than 30,000 workers and 9,000 employers with access to the internet in 19 countries. Furthermore, Gallup analyzed job vacancy data from 33 countries to further assess demand for digital skills and how much employers are willing to pay for them.

The findings from this study detail the economic value that digital skills provide for businesses and workers worldwide. Depending on their level of proficiency, digital workers earn between 14% and 65% more than nondigital workers. The most advanced digital businesses report annual revenues that are 168% higher than organizations that only employ technology such as messaging apps and productivity software. And as a result of these advanced digital skills, the global economy gains $6.3 trillion each year.

Additionally, the study reveals practical obstacles to hiring digital workers, including insights on the perceptions of digital skills certifications versus a traditional college degree.

Download the report to see the impact digital skills have on a global scale. 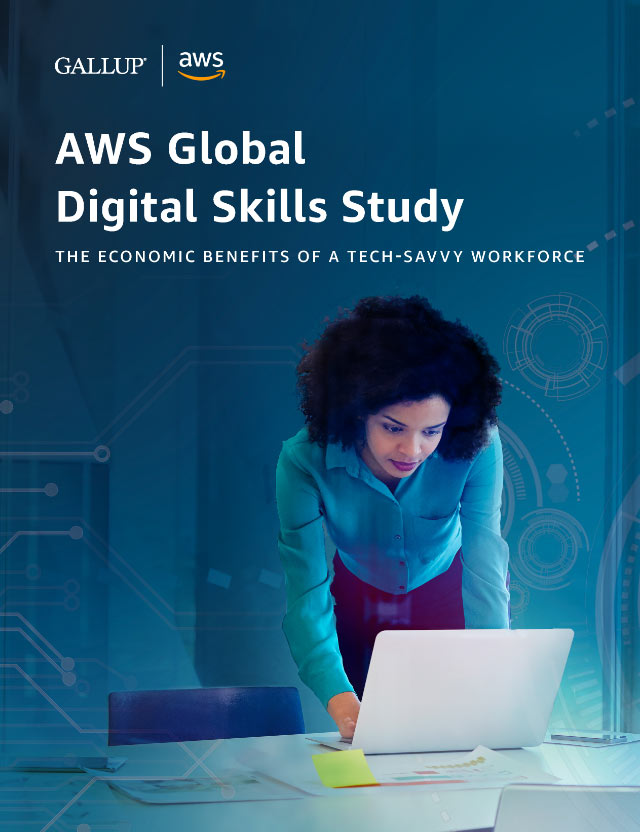 Results from the AWS Global Digital Skills Study are based on self-administered web surveys conducted August 2-23, 2022, using opt-in sample provided by Dynata, with worker and employer populations and markets in the following countries: the U.S., Canada, Brazil, the U.K., Germany, Australia, Japan, France, India, Singapore, Italy, New Zealand, South Korea, Indonesia, Thailand, Malaysia, China, Taiwan and Hong Kong. The survey was conducted in the primary language(s) in each country. Respondents were recruited using an opt-in, online sample in each country. Thus, only workers and employers aged 18 and older who are internet users were included in this research. Workers were eligible to participate in the first section of the survey if they were employed in any way, and they were eligible for the digital skills section if they worked in a job that involved handling information and used a computer. For the employer survey, respondents were eligible if they were employed and indicated that they were a mid- or senior-level business leader, information technology (IT) leader, or IT decision-maker working in the private or public sector in an organization with at least five employees. For the digital skills section, employers were also required to employ workers who use a computer.

The worker data are weighted to match national demographics in each of the selected countries of gender, age, race (U.S. only), Hispanic ethnicity (U.S. only), education, employment status and region (all except Singapore). Demographic weighting targets are based on the most recent Gallup World Poll data figures for online population aged 18 and older in each of the target markets. Gallup also created projection weights based on population figures for some analyses of global, aggregate-level data.

See the report for a more detailed description of the methodology, including credibility intervals for each country.