Exploring human connection across diverse regions around the world

Connections with others are essential to people's well-being and mental health. But while academic literature has long validated the importance of human connections, there has been little research that provides representative, multinational data on how connected people feel and how they connect with others.

More governments, organizations and companies are turning their attention to understanding the nature and impact of people's social connections, driving heightened interest in, and need for, such research. 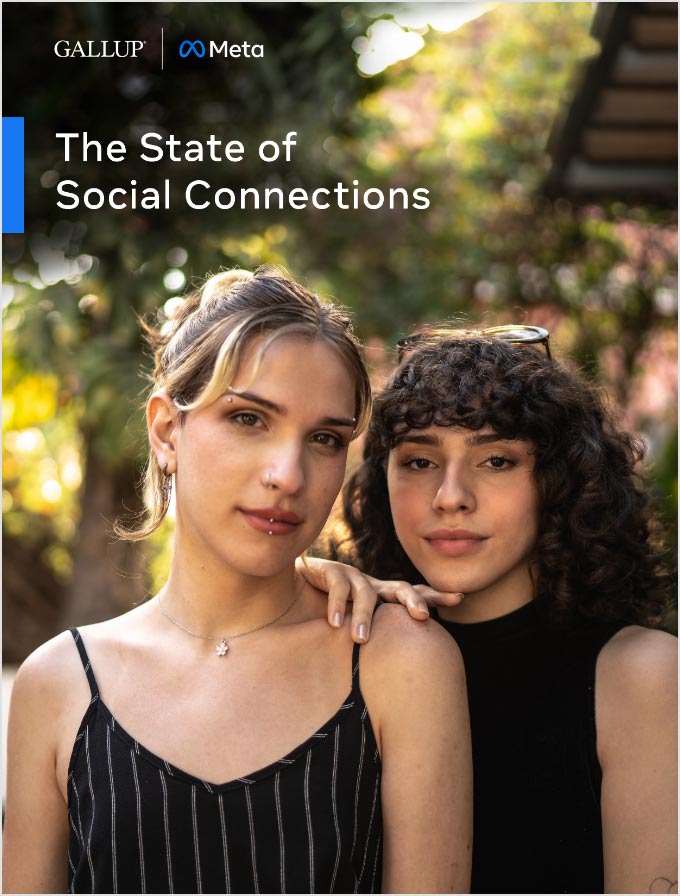 To address this gap, Gallup, Meta and a group of academic advisors collaborated to design and conduct the State of Social Connections study, which offers a first look at how social connections vary across different geographic regions.

Explore the report to learn:

Meta and Gallup continue to explore how social connections are shaping people's worlds. Further research using The Gallup World Poll will be released in 2023.

Data presented here are drawn from an in-depth survey on people's social connections in seven countries: Brazil, Egypt, France, India, Indonesia, Mexico and the United States. Countries selected for this phase were chosen based on the representativeness of languages spoken globally, population size and world region.

Meta and Gallup engaged in a collaborative process to design all aspects of the study, including developing the survey instrument and analyzing the data, and incorporated critical inputs at several key stages:

For the final survey, Gallup interviewed a minimum of 2,000 people aged 15 or older in each country between April and June 2022.2 Interviews were conducted face-to-face at respondents' homes in Brazil, Egypt, India, Indonesia and Mexico, and via landline and mobile telephone in France and the United States. All samples were probability-based and representative of the national population within each country. The data within each country was weighted to minimize bias and project the sample data to its corresponding target population, and all estimates presented in this report take into account the design effect introduced by the complex sampling designs.

Assuming a 95% confidence level, the maximum design adjusted margin of error for a country-level percentage estimate ranged from ±2.5% (Brazil, India, Indonesia, Mexico, United States) to ±2.7% (Egypt and France).3 For full details on the study methods, including sampling, weighting and analytic approach, see the accompanying methodology report.

The results presented in this report are focused on descriptive statistics and exploratory analyses. Where appropriate, the amount of certainty in specific estimates (i.e., 95% confidence intervals) and model comparisons (i.e., likelihood ratio tests) were used to help identify differences between groups and guide interpretation of results. Effect sizes are also available for interpretation in the methodology report.

1Meta and Gallup sought expertise from a wide group of academics in early stages of study conceptualization. Academic advisors who provided consultation on a consistent basis for the study included Nicole Ellison, University of Michigan; John Helliwell, University of British Columbia; Julianne Holt-Lunstad, Brigham Young University; Sonja Lyubomirsky, University of California, Riverside; and William Tov, Singapore Management University. Academic advisors were not compensated financially for their time and expertise but were provided opportunities to access privacy-protected study data before it was publicly released and to collaborate with Meta and Gallup on publications.2All participants provided informed consent to participate. Parental consent was obtained for all those under the age of majority in each country studied.3Aggregate data, including country-level weighted estimates with standard errors, 95% confidence intervals and question wording, are publicly available here.

The Meta-Gallup State of Social Connections report finds that feelings of connection were less common among people with lower socioeconomic status.

Read Report Press Releaseto read about The State of Social Connections Report
5 in 10 Over 5 in 10 people across countries studied felt either "very" or "fairly" connected to others.
60% More than 60% of people reported using two or more modes of interaction at least daily.
20% At least 20% of people used What'sApp, Facebook/Facebook Messenger, or Instagram to get support or help.