The national rate of chronically absent students in U.S. public schools is 16% (over 7 million students), according to a briefing recently updated by the Department of Education, Chronic Absenteeism in the Nation's Schools. Chronically absent students are more likely to fall behind in their classes and to drop out of high school -- which is tied to a higher likelihood of "poor outcomes later in life, from poverty and diminished health to involvement in the criminal justice system."

Adding to the alarming outcomes from the Department of Education briefing, the Economic Policy Institute published study results in 2018 listing the negative effects of chronic absenteeism on student test scores. The report states that eighth-graders who missed three or more days the month before testing scored 0.3 to 0.6 standard deviations lower on the NAEP math test than students who did not miss any school.

Lower academic performance, missed educational experiences, increased dropout rates and poor life outcomes -- including poverty, health challenges and involvement in the criminal justice system -- should push education leaders to find the driving source of chronic absenteeism and do everything possible to eliminate it.

The national rate of chronically absent students in U.S. public schools is 16% (over 7 million students).

With the implementation of the Every Student Succeeds Act (ESSA) encouraging more diligent tracking and reporting of student behavior metrics, chronic absenteeism has become a focal point for parents, principals, districts and states (36 states include chronic absenteeism in their ESSA plans). The updated federal education law, important for holding schools accountable for students' absences, is increasing the urgency for educators to find ways to decrease chronic absenteeism.

A recent study using student engagement data from the Gallup Student Poll found that schools in the top quartile of engagement had significantly fewer chronically absent students than schools in the bottom quartile of engagement (9.18% vs. 19.23%, respectively). This 10-percentage-point gap in the percentage of chronically absent students who are engaged vs. actively disengaged provides a clear opportunity for superintendents, principals and teachers to purposefully and intentionally increase the engagement of their students. To engage students and lower the rate of chronic absenteeism within schools, concerted efforts can be directed at a number of specific areas. When assessing student engagement, Gallup asks participants nine questions aimed at measuring students' "involvement in and enthusiasm for school." Intentional action planning and follow-up can be leveraged to increase student engagement with the goal of decreasing chronic absenteeism (as well as suspensions, truancies, dropouts and expulsions).

Focusing on improving student engagement can have a massive overall effect across public schools. If the entire public school system used student engagement to lower the national chronic absentee rate by just six percentage points (lowering the national rate to 10%, using the Department of Education's staggering 7 million chronically absent students as a baseline), more than 2.6 million students would no longer be considered chronically absent. That number represents more public school students than in 46 of the 50 states!

Increasing student engagement to decrease chronic absenteeism is an attainable, simple and necessary option that all districts and schools should include in their future strategies and goals.

Gallup helps school districts measure and improve engagement -- as well as levels of hope, entrepreneurial aspiration, and career and financial literacy -- using the Gallup Student Poll. Participating schools receive their survey results with actionable insights and a toolkit of resources to increase student engagement. We offer simple strategies for solving a critical need.

Discover Gallup Education's insights and advice to transform your school:

Mark Reckmeyer is a K-12 Education Researcher and Consultant at Gallup. 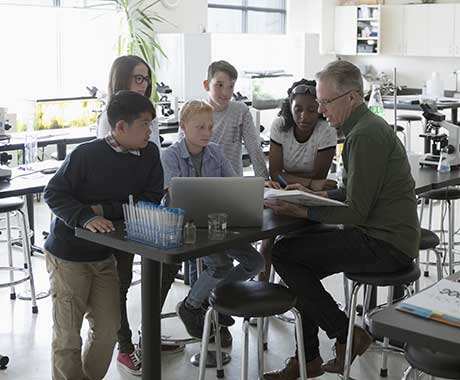 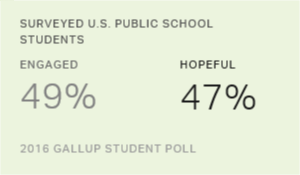 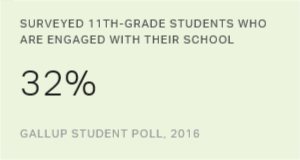 How to Keep Kids Excited About School

Students become much less engaged as they move through middle school to high school.

Positive Relationships Between Student Engagement and Hope and Student Behavior