After a promising start, Airbnb's revenue fell below expectations. Intent on finding a solution to the slow growth, Airbnb's founders -- Brian Chesky, Joe Gebbia and Nate Blecharczyk -- pored over their massive pile of data from their Mountain View headquarters located in Silicon Valley.

The numbers didn't yield an answer, and anxiety was mounting. And then one of their eventual investors asked a question that saved the company:

"So, you're in Mountain View, and your users are in New York?"

"What are you still doing here?" he asked. "Go to your users."

Technology is a great imitator. It has imitated everything from taxi drivers to workplaces to friendships. But as the Airbnb example shows, and our own experiences on social media confirm, imitation can only take you so far.

Organizations spend millions on new technology that spits out mountains of data, only to find themselves right back where they started -- with the same mediocre decisions, same mediocre behaviors and same mediocre outcomes.

Technology alone is critical -- but insufficient -- to real change and real improvement. To optimize organizational outcomes, companies need leaders who know how to optimize human behavior. Without a mastery of human psychology, human behavior and human performance, the organization is vulnerable.

Because the one thing tech has yet to imitate successfully is human psychology.

Psychologists Are Winning the Nobel Prize in Economics

It's true that what used to require millions of dollars of capital expenditures and hard assets can often be replicated by today's smart technology. No one needs a team of people to take customer orders, nor to make the space or supply equipment to house them, when an app can do it in a second.

So why are psychologists winning the Nobel Prize in economics? Because the last inimitable asset on your balance sheet is your people.

A client once told me, "Psychology is the new MBA." She is exactly right.

Barriers to entry are falling as tech gets faster, cheaper and it's easier to go from idea to implementation. And the risk of digitization disrupting an industry is scaring companies across the globe.

Companies that are over-awed by technological capabilities risk ignoring their most valuable, and least imitable, asset: people. A client once told me, "Psychology is the new MBA." She is exactly right.

Psychology is how you win in business, especially in a highly digitized world. In the end, humans are making decisions about how to spend their money and where they invest their loyalty. Those decisions have to be understood from a human perspective.

And on that far off day, when artificial intelligence can fully imitate human intelligence and psychology, the AI will work alongside humans and for humans, acting like a human. If the programming is good because the psychology is right, the outcome will win.

But if the programming lacks expertise in human psychology, the AI will execute like this: garbage in, garbage out.

Differentiate Your Company in a More Digitized Market

So organizationally, how do we manage our last inimitable asset effectively? Where is the space for psychology in business?

When you optimize your company culture, you're making your people a priority -- you're optimizing the performance of your most valuable and last differentiable asset. For all its power to imitate, the one thing tech can't fully duplicate is culture.

Leaving culture to chance leaves you vulnerable to disruption. Technology can and eventually will imitate everything else that sets your company apart in the market. Chesky, Gebbia and Blecharczyk had a very near miss with Airbnb. They were lucky to get the advice they needed when they did -- but it was luck.

Businesses can't count on luck. But they can count on culture if they put in the work.

Learn more about Gallup's recommendations for optimizing your company culture: 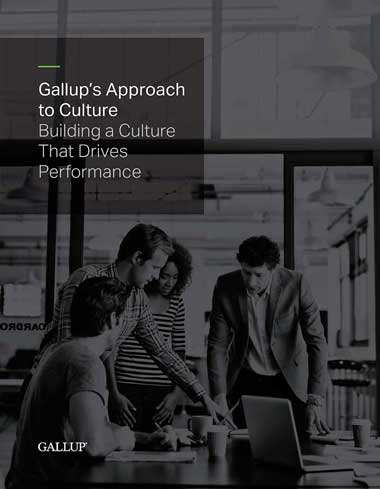 Learn how to cultivate trust in an environment that asks employees to implement tools that may eliminate jobs. Instilling trust can prevent conflicts of interest.

Digitizing Culture: Are You Doing It Wrong?