skip to main content
Workplace
How to Encourage Differing Opinions, Not Conformity

We've all been in this situation: You're in a meeting where everyone else in the room fervently agrees on a solution, and you're the only one who's still opposing it, or at least doubting it.

But since everyone else is saying yes, maybe you're missing something or just being a naysayer? Should you go along, or keep fighting?

Employees often face this dilemma, referred to as "conformity bias," where individuals feel pressured to conform and go along with the decisions of others who all agree on one thing, even if the decision seems wrong.

This bias can have devastating effects at the top echelons of your organization where key decisions can affect not only the entire employee population, but your customers as well.

In the Challenger space shuttle launch, engineers clearly saw and alerted NASA leaders about warning signs that the freezing temperatures forecast for the scheduled launch day would put untested strain on the O-rings of the shuttle. And yet, the consensus of NASA leaders was to move forward with the launch, because that was what the majority of the people involved in the decision-making process thought was best.

This resulted in the shuttle's explosion and the deaths of all seven people onboard -- five astronauts, one payload specialist and one civilian school teacher.

More recently at Theranos, the pressure to launch much-hyped blood testing devices -- devices that were unproven and ultimately revealed to be faulty -- went unchallenged for a long time. These blood tests sent otherwise healthy patients to emergency rooms because their lab results came back with elevated readings for serious diseases.

These situations clearly show the mistakes that can happen when employees aren't empowered to push back -- or when leaders aren't aware of or actively seeking ways to reduce conformity bias.

What should leaders do to avoid this lapse in decision-making? The first thing they can do to mitigate conformity bias is to ensure that everyone at the table has a voice and that all options are on the table to work toward a better solution.

Here are three effective ways to coax differing opinions and create a workplace culture where all employees can share their honest thoughts:

Even before team members meet to talk about an issue, leaders can ask for their opinions and thoughts either through private conversations, written individual feedback or by other means of communication.

It's important for leaders to acquire the opinions of every team member without the individuals knowing what others think before they express their own opinions. You're also giving everyone a chance to think it through first.

Gallup's research shows that having your opinions heard -- "At work, my opinions seem to count" -- is one of the critical factors for fostering employee engagement and a culture of psychological safety.

People should express their viewpoints before they are pressured -- consciously or unconsciously -- to align their views with the perspectives of others.

Leaders who ask for input before trying to force a consensus are on the path toward creating an engaging and inclusive culture that treasures divergent ideas and opinions.

People should express their viewpoints before they are pressured -- consciously or unconsciously -- to align their views with the perspectives of others.

2. Lay out all the options.

Leaders often make decisions behind closed doors, but there are times when the leader is not the primary expert and a team decision-making process becomes a crucial step that shouldn't be overlooked.

Once a leader solicits input from their team, they can lay the options out anonymously on the table for everyone to review.

Team decision-making is a process of acknowledging different options and weighing their pros and cons with no judgment. Transparency is key and this is an important step for teams to make sound decisions.

It's also crucial to establish an expectation that team members can disagree and debate ideas, but they should not disparage them.

Leaders need to know and manage each team member's strengths and weaknesses. You don't want one person's voice to dominate the team.

By knowing the natural strengths of each person on your team, it can help you manage situations where there may be several individuals whose voices are softer and ensure they are heard.

Holding a team session to learn about people's CliftonStrengths will raise awareness of each individual's strengths, tendencies and desires, which is a helpful lever for effective team decision-making.

A CliftonStrengths team session helps leaders understand who might need more coaxing to get their opinions out and how to handle those with stronger voices.

Conformity bias isn't always the result of people asserting themselves disproportionately, though.

We worked with a leader in charge of a research team struggling to get creative ideas during meetings; everyone seemed to passively conform to a neutral stance.

We had the research team take the CliftonStrengths assessment, and we identified that the team was high in Strategic Thinking themes such as Learner, Intellection, and Analytical.

Given these strengths, they were not willing to speak up in the meeting with off-the-cuff radical ideas or immediately challenge an idea without having vetted it in their heads first.

The leader changed tactics and began to solicit opinions in advance through email and share them anonymously with the team ahead of the meeting. When all the feedback and options were available in advance without being tied to a name, the researchers came to the table with ideas that led to more brainstorming and collaboration during the meeting.

Reduce the pressure on people to conform so you can make better decisions.

According to Gallup's latest book, It's the Manager, one of the most important traits of a successful leader is that they know how to make great decisions.

And to reach the best decisions, they need to reduce bias and build an inclusive workplace culture so people feel comfortable sharing differing, perhaps unpopular opinions.

If you choose to solicit ideas in advance and work through decisions with your team, you may initially be met with skepticism and have to face a new decision-making learning curve.

However, over time, you will build a culture where people realize that it's acceptable to go against the grain, it's acceptable to have healthy disagreements with others, and that having an array of ideas -- even radical ones -- brings about more sound decision-making.

That's not only a cure that relieves the pressure to conform, but it's a recipe for a healthy culture of inclusion, innovation, great decisions -- and success.

Junko Sasaki is a Senior Research Manager at Gallup.

Ken Royal is a Partner at Gallup.

What to Do if You're Surrounded by Yes-People

Learn how to create a workplace culture where people at all levels can speak truth to power. 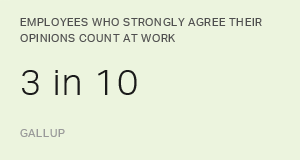 Build a Culture Where Every Employee Can Use Their Voice