Studies show that decisions made during the first few months of a CEO's tenure are disproportionately important in determining his or her success. However, several issues -- unique to CEOs and often overlooked -- complicate or even cloud good decision-making.

First, new CEOs often spread themselves thin in an attempt to understand every stakeholder and nuance of the business. Second, they are heavily shaped by current employees' perspectives.

These factors can lead to a superficial, biased or insufficient understanding of the organization's strengths and weaknesses.

What You Need to Know to Avoid Mishaps New CEOs Make

If you're a chief exec or even an executive leader:

Now that you've identified them, ask yourself:

One Gallup client learned his best customers were leaving not because they had problems, but because too many people were involved in fixing them.

Another CEO was mystified that his best salespeople were performing so badly -- Gallup consultants revealed that a lack of reliable office management had a direct correlation with their performance.

Seemingly small things can have a huge effect -- and those small things are easy to overlook. Even when promoted from within, a new CEO's perception of an organization's talent assets can be limited. We all best understand the people we know well and the business units with which we're most familiar. Yet a CEO's view must be comprehensive and extremely thorough to effectively distinguish, retain and get the most out of revenue-producing talent.

The nature of the CEO's job makes it difficult to recognize the nuances of employee and customer interactions and their effect on the business. Assessing that effect requires a thorough process, one geared toward finding the best direction to pursue using the strengths of your human capital assets to find opportunities for customer relationships.

Take a Closer Look at Your Company's Culture

According to a May article from McKinsey & Company, "67% of new CEOs, looking back, wish they had moved faster to change the culture." That is understandable -- but how are new CEOs supposed to know what needs changing? The cultural elements that matter most in attracting and retaining the best talent and the best customers can be very hard to identify.

And very few CEOs, new or not, have the time, capacity or resources to accurately identify the specific behaviors among individuals, departments and business segments that routinely motivate employees to be a star every day.

That's why Gallup scientists and consultants identify the capabilities and strengths of those in significant roles -- usually via carefully constructed focus groups and stakeholder interviews -- to identify common points of pride, purpose and motivation. That equips CEOs to develop and implement strategies that fit their culture or, if need be, reconstruct their culture.

Too few are so equipped, it appears: The average tenure of an S&P 500 CEO is five years, which is a year less than it was in 2013. That's chilling, and may cause up-and-coming leaders to hesitate before taking on the ultimate responsibility for a company.

It is true that new CEOs face some daunting challenges, but they can increase their odds of success if they get the facts they need to make decisions and set priorities. They don't have much time to do it, though -- research shows the average CEO tenure is decreasing rather than increasing. Not getting accurate, objective, performance-related insights is a mistake any new CEO can make. But the right advice and analytics can prevent it from becoming a career-ending mistake.

Now that you know the pitfalls, start here to quickly and efficiently drive performance:

Jake Herway is a culture and change subject-matter expert at Gallup.
Jennifer Robison contributed to this article. 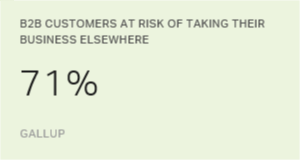 Why B2B Leaders Should Rethink the True Cost of Large Accounts

Learn the causes of low profitability among your large B2B accounts so you can address them with a new strategy.

In thousands of B2B customer interviews, Gallup has observed partnerships that create great value for both customers and suppliers. An expert reveals the traits these rare relationships share.

The Silver Lining of Customer Problems