One of the most effective tools for accelerating performance is also one of the least used: praise. Gallup finds that only one in three workers in the U.S. and Germany strongly agree that they received recognition or praise in the past seven days for doing good work -- and those who disagree are twice as likely to say they'll quit in the next year. Praise is that powerful.

Recognition has an equally powerful effect on teams, according to recent data from France, Germany, Spain and the U.K.: Considering the power of team-level recognition, it's alarming that no more than a third of western European and U.S. employees, according to recent Gallup research, strongly agree that their organization recognizes team achievements (33% in the U.K., 33% in Germany, 25% in the U.S., 24% in Spain and 19% in France).

Companies can do better. Here's how.

To turn those numbers around, leaders need to make praise part of their day-to-day work culture. Scheduling feedback in ongoing manager-employee conversations is an effective method. In fact, consistent feedback is part of the five conversations managers should have consistently. Regular feedback shows workers how they're contributing to the organization and that their contributions are valuable.

Regular feedback shows workers how they're contributing to the organization and that their contributions are valuable.

A work culture that abounds with recognition for each team's good work connects those teams' performance to overall corporate goals. For individuals and teams, praise should be tied to a specific event, well-founded and precisely worded. Gallup data also show that group praise is more effective when it's:

1. Public rather than private. On an individual level, leaders and managers should give praise that complements the person's preference (e.g., some don't like public acclaim, and others think it's the only kind that matters). But leaders should highlight a team's efforts to the biggest possible audience. Doing so fosters better cross-team collaboration because it sends a strong message about what the organization values: team sport!

2. Continuous and spontaneous. Feedback has a shelf life. If you wait too long, it loses efficacy. So, use small opportunities in daily work to recognize teams with personalized, authentic and honest praise. Though recognition at big corporate events and team or department meetings bonds a team in a way nothing else can.

3. Encouraged on a peer-to-peer basis. In cultures that encourage employees to celebrate each other, coworkers learn from each other's success. It improves accountability -- hence, higher productivity -- and gives everyone's honest feedback more value. And recognition begets recognition: A study conducted in Germany a few years ago found 66% of employees agreeing with the statement: "If I get recognition, I would also like to give others recognition."

The power of praise can be measured, as the data show. But praise also changes the employee experience in subtle but important ways: Recognition helps individuals accurately assess their performance. It provides the data we need to master new tasks and demands. It creates positive emotions, inspires broader perspectives and stimulates creative thinking -- all at the foundation of innovation.

And recognition is one of the most effective ways to connect the needs of the employee to the needs of the organization. Praising U.S. teams can redirect personal competitiveness toward organizational goals. Praising German teams, on the other hand, can offer a stamp of approval that spurs teams to be more creative.

In cultures that encourage employees to celebrate each other, coworkers learn from each other's success.

These companies are laying the foundation for extraordinary partnerships characterized by a common mission, fairness, trust, mutual acceptance and communication, Gallup finds. Some partnerships have two more elements -- forgiveness and unselfishness. These characteristics create extremely productive, virtually frictionless work styles. And they're qualities organizational cultures would profit from.

Quality partnerships -- including team-borne partnerships -- produce outcomes no one person could. It's worth asking: How much more could your teams accomplish if their achievements got the group recognition they deserve? 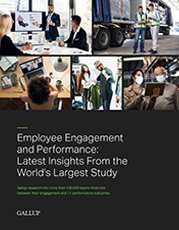 Report
Get Gallup’s Latest Insights on Employee Engagement
Read the highlights from Gallup’s employee engagement meta-analysis -- the largest study of its kind.

A recognition-rich culture starts at the top. Make sure to recognize your remote employees often for their exceptional work.

Create a Culture That Inspires: Celebration and Success

Learn how organizations can create a culture that recognizes and celebrates success -- even among their remote workers -- in Part 4 of our Culture That Inspires series.

How to Improve Teamwork Collaboration in the Workplace

Learn how Gallup's research findings and CliftonStrengths can help you improve teamwork and team collaboration in the workplace.

The 5 Tactics of Teamwork: A Blueprint for Team Management