When Chlöe Swarbrick, an MP in New Zealand's Parliament, responded to a colleague's interruption of her speech with "Ok, boomer," media outlets around the world scrambled to explain Swarbrick's remark.

Many of them chastised Swarbrick for insulting baby boomers -- and were criticized in turn by their own audiences. "Ok, boomer" originated on social media platform TikTok to mock condescending closed-mindedness, not age.

The confusion around Swarbrick's comment confirms what leaders of a multigenerational workforce already know: Different generations in the workplace -- and there can be five in the same office -- have very different perspectives. Smoothing them over is a challenge.

Gallup analytics has a solution: Don't.

Instead, focus on your employees' most important differences.

Giving up on smoothing over has important implications. To begin with, those five generations really do expect different things from work.

As Gallup analytics shows, millennials are more likely than the previous generation to say that development opportunities and "quality of manager" are extremely important in a new job.

Millennial employees are dead serious about advancement, are motivated more by mission than money and want coaching, not bossing. Maybe that's not so different than what people of all generations really want … but millennials' high quit rate shows they'll leave rather than accept the kind of management the baby boomer generation has tolerated.

That seems like a major generational difference -- and leaders should take it seriously -- but it's really small potatoes compared to the differences between employees' CliftonStrengths. A reflection of deep neurology, our CliftonStrengths influence the way we think, feel and behave, the way we see the world and react to it. That influence is orders of magnitude stronger than any generational characteristic. And each person's unique strengths explain -- and predict -- performance with such acuity that generational labels seem feeble by comparison.

A reflection of deep neurology, our CliftonStrengths influence the way we think, feel and behave, the way we see the world and react to it.

Managing Millennials and Boomers in the Workplace

When team members understand the way their brains work, the way they relate to each other changes. They can't claim Sharon's extreme productivity is due to her baby boomer work ethic (and neither can Sharon, for that matter) -- it's because Achiever is among her top five CliftonStrengths themes. Jason's aversion to forced ranking is not some kind of Gen Xer apathy -- it's because Competition is last on his CliftonStrengths profile. Intense Command, not the infamous "millennial entitlement," drives Taylor to take charge.

A canny manager uses a team's understanding of these deep, intractable differences to bring people together: An employee who needs help hitting a deadline needs Sharon. Jason should be part of designing the onboarding routine. Taylor will rally the troops when a project is going to pieces. And even though Sharon thinks paycheck is purpose enough while Taylor feels work ought to have real meaning, high-Command Taylor may be Achiever-driven Sharon's saving grace when she isn't getting enough achieved.

Strengths' influence on behavior is orders of magnitude stronger than any generational characteristic. And strengths explain -- and predict -- performance with such acuity that generational labels seem feeble by comparison.

And if that canny manager coaches people to use their strengths deliberately, the team's performance can be extraordinary: On average, workgroups that receive strengths coaching have up to 19% increased sales, 29% increased profit, 7% higher customer engagement, 16% lower turnover (in low-turnover organizations), 72% lower turnover (in high-turnover organizations), a 15% increase in engagement and 59% fewer safety incidents than teams that don't receive strengths coaching.

Sure, generational expectations in the workplace are real and can have a real impact on your business. Leaders should not ignore them. But talents -- which define us on a profoundly meaningful level -- prove our differences are a thing to admire and use, not insult.

There's a Key to Talking About Generational Differences (Specifically, Millennials vs. Baby Boomers)

It's all a matter of approach.

Which brings us back to New Zealand. Insults aren't uncommon within its Parliament, and MPs often respond with more heat than Chlöe Swarbrick did. Nonetheless, Swarbrick got worldwide flak for her remark, which she responded to in a Guardian op-ed. "My 'OK, boomer' comment in Parliament was off the cuff, albeit symbolic of the collective exhaustion of multiple generations," she said, "set to inherit ever-amplifying problems in an ever-diminishing window of time."

Her eagerness to solve big problems is laudable, and likely why constituents voted for her. They may feel she's doing the right thing the right way.

But if she were your employee, you probably wouldn't. You might commend her zeal, you might be relieved that she noted "multiple generations." But you'd know that whatever "Ok, boomer" originally meant, it sounds like an insult. It sounds like prejudice.

Yes, people will always make presumptions about others. No, you can't change that. But you can change what people presume of each other. Indeed, you have the rare power to make people's presumptions accurate. CliftonStrengths gives it to you. Use it.

As the generational composition shifts within companies, the potential for miscommunication and misunderstanding grows. Things could get ugly. Or a lot better -- it depends on your approach.

Show people how they're really different, and you'll show them why they're valuable. Why everyone is valuable. That perspective is a lot more meaningful than demographics, and far better for your business.

For more ways to approach generational differences in the workplace:

Klayton Kasperbauer contributed to this article. 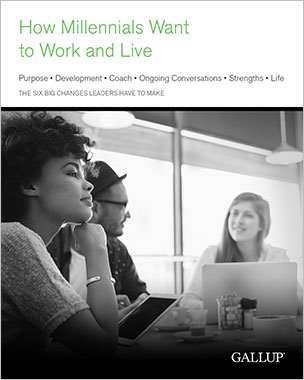 Report
How Millennials Want to Work and Live
Discover what millennials want and what that means for the future of your organization. 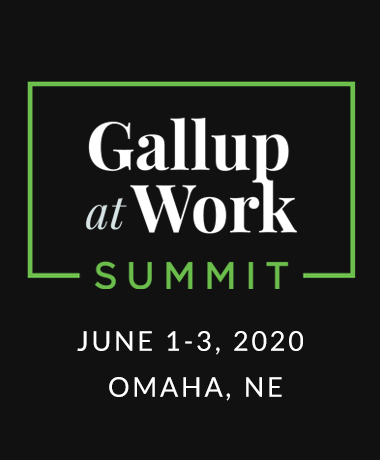 Event
Gallup at Work Summit
Explore the power of CliftonStrengths, and learn to use them to empower people, disrupt the workplace and change the world.

Wellbeing by Generation: Where Some Thrive, Others Struggle

Different generations have different wellbeing needs. Learn what those differing needs are.

Why Millennials Are Job Hopping

Millennial job hopping doesn't have to be the new normal, but leaders need to make them want to stay.

Give Up Bossing, Take Up Coaching: You'll Like the Results

Your position won't change, but your approach will. And so will your results.