It's no surprise, therefore, that female SBOs are more likely than male SBOs to report worsening mental health (31% vs. 20%). "People are always saying, 'We're all in it together,' and we are," said Jessica Meredith, who owns Bright Futures Child Care in Crete, Nebraska. "But we're not all struggling the same way."

The data confirm Meredith's perspective. Only 27% of small-business owners are women. Compared with their male peers, they tend to have lower revenue, they receive negligible VC funding (just 2%), and they are less likely to get traditional small-business loans. And when women do get financing, their business loans are 31% smaller than those for men -- even when their companies have "similar characteristics like past performance and number of employees," according to a 2014 study by professors at Northeastern University and Babson College.

The COVID-19 pandemic just made things worse. "It brought my business to a standstill," said Tracy Blessen, who owns Furnishing Works, a home staging and design business in Napa, California. "And when you're in the thick of it, your decisions depend on the amount of cash you have."

Female SBOs' increasing levels of stress and worry have a lot to do with severe financial hardship caused by COVID-19.

Gallup asked small-business owners, "How worried are you that you will experience severe financial hardship as a result of the disruption caused by the coronavirus?" Female owners (29%) were more likely than male owners (23%) to say they are "very worried."

Particularly galling is that female-owned businesses were on an upswing before the pandemic. Until now, these businesses were growing and earning better than they had at any other time in corporate history. A Bank of America small-business report found greater optimism last year among women than men. The lending gap was narrowing.

Then came the pandemic -- and now more than 35 million employees of small businesses are at risk of losing their jobs.

Gallup has found that even when controlling for political affiliation, business size and business location (urban/rural area), female SBOs are more stressed and worried than male SBOs.

The good news is that Congress has approved $670 billion in loans for small businesses through the CARES Act. Though a small minority of applicants have received those funds, the money can be a lifeline for the SBOs who can access it.

The bad news: The stimulus package keeps running out of money. The program available to the largest number of small businesses -- the Paycheck Protection Program -- requires owners to apply for loans through existing lending institutions and only covers payroll costs, mortgage interest, rent and utility costs over the eight-week period after the loan is issued.

Female SBOs tend to have fewer employees and are likelier to be self- or family-funded rather than bank-financed. And the National Federation of Independent Business reports that 84% of successful PPP applications were submitted by business owners who have a preexisting relationship with the bank processing their application.

This means that female SBOs who are under- or unbanked (as is typical) may be less likely to receive federal stimulus money -- suggesting, unfortunately, that women have every reason to worry about their businesses.

And that feeling can affect their performance. "Negative emotional states are associated with worse business results. They can lead to panic attacks, depression and the inability to make practical decisions," said Dr. Michael Freeman, who teaches in the Department of Psychiatry at the University of California San Francisco School of Medicine and has a consulting practice focused on entrepreneurship and performance enhancement coaching.

Female SBOs tend to have fewer employees and are likelier to be self- or family-funded rather than bank-financed.

Still, "those who start businesses because they see an opportunity -- not out of necessity -- are usually very optimistic, confident and flexible," said Freeman. "My experience tells me that entrepreneurs are probably seeing a lot of potential, even now."

We hope that is the case. SBOs are job creation machines, and they employ about half of the private-sector workforce in the U.S. When SBOs cut staff to stay afloat -- as did Meredith, who used to employ 28 people and is down to nine now -- it's a personal disaster for the small business and an economic problem for everyone.

Improving immediate access to funds, though critical, is only one part of the story. The most vulnerable of small-business owners also need the psychological assistance and support that enables them to rethink their business models; renew or redesign their marketing channels; refocus on their customers, employees and suppliers; and be ready for the "next normal."

That's why overreliance on one-size-fits-all policies may devastate small businesses owned by women -- they support too few kinds of businesses. And diverse local economies are critically important for long-term economic growth. The past few months have been hard on female SBOs, and an economy without their contributions would be hard on all of us.

And that's why it's important to recognize that while we're all in it together, our nation's small-business owners are not all struggling the same way.

Female small-business owners' levels of stress and worry have increased, but they don't have to stay there: 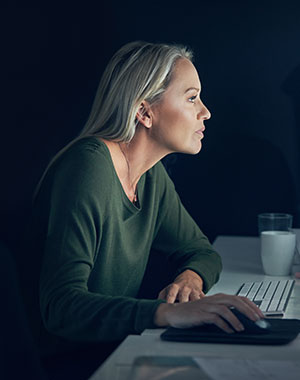 A Guiding Star During Coronavirus: Your Company Values

Learn why your company culture should guide your leadership decisions during this crisis.

3 Keys to a Resilient Brand

Create a business continuity strategy that strengthens the bond between your brand and customers and protects you from the crisis aftereffects.

How Coronavirus Will Change the 'Next Normal' Workplace

Remote work preferences and policies have been drastically influenced by the COVID-19 outbreak. Learn how remote work may become the "next normal."