skip to main content
Workplace
Is the 4 Day Work Week a Good Idea?

Amid alarming levels of employee stress and burnout, some organizations are considering what might have been unthinkable to many a few years ago: reducing the work week to four days.

It's a controversial idea -- but is it a good one? Or are there better ways to promote worker productivity and wellbeing?

Some studies support reducing the number of hours worked each week. An experiment conducted in Iceland between 2015 and 2019 found that doing so while keeping pay the same increased productivity.

A similar work model -- a four day work week trial -- is being tested in Spain. In Japan, employers are urged to permit their employees to work four 10-hour days. And Scotland recently announced a policy to cut working hours by 20% without a decrease in pay.

Organizations are running their own experiments, as well. A New Zealand company reduced weekly hours from 37.5 to 30 -- and allowed employees to decide what days they would work. Another organization gave employees every other Friday off each month; according to the CEO, some workers enjoy using that day for individual "deep work," undistracted by meetings or calls.

What's more, leaders all over the world are considering more permanent flexibility with remote or hybrid work arrangements based on what they learned from the largest "forced work experiment" in history during COVID-19.

The Complex Relationships Among Time, Work and Wellbeing

In addition, those working four day weeks were found to have the highest rates of thriving wellbeing (63%), compared with those working five (57%) or six days (56%).

Interestingly, while the percentage of engaged workers was similar across the three work week conditions, the percentage of actively disengaged workers was highest for those with four day and six day work weeks. The ratio of engaged to actively disengaged employees was best for those with five day work weeks -- a ratio of 3.2-to-1. Four day workers had a ratio of 2.2-to-1, and six day workers had a ratio of 2.1-to-1.

As mentioned above, Gallup found wellbeing differences between those with four day versus five day work weeks. The percentage of full-time employees considered to be thriving was six percentage points higher for those in the four day group. Burnout was three points lower for four day workers -- but active disengagement was five points higher.

This shows how nuanced the issue is. Employee engagement certainly doesn't improve with a four day work week, but wellbeing does -- it is likely that a shorter work week provides more opportunities for nurturing social, physical and community wellbeing.

Even so, moving from working five days a week to working four could increase an organization's percentage of actively disengaged employees.

In other words, by working fewer days per week, employees who already feel disconnected from their employer, team or manager are more likely to drift even farther away -- from tolerating their jobs to hating them.

The Problem Isn't the Number of Workdays -- It's the Workplace

Debates over changing up the work week aren't new. In 1926, Ford Motor Company standardized a five day work week from the prevalent six days. Ford's leaders theorized that fewer days worked with the same pay would increase productivity through higher effort while at work.

But beneath the long-standing debate over the work week lies a deeper question about the nature of work itself. Consider these findings:

So, all of this complicates the question of whether implementing a four day work week is the right way to promote employee wellbeing.

If the goal is to build an engaging workplace culture, reducing the work week may not be the place to start.

While four day work weeks may be a good idea for some individuals or organizations, policies that seek to control work-life "balance" are based on two dubious assumptions: 1) that work is inevitably a bad thing that should be reduced or avoided and 2) that we know what will work effectively for all people.

If the goal is to build an engaging workplace culture, reducing the work week may not be the place to start.

Meaningful work is an essential part of a life well-lived. Work can be richly rewarding -- and is for many. One of the most universal human desires, according to Gallup's global polling, is to have a good job. How many retirees have found that, in the end, they long for the purpose, stimulation and social connection that work provides?

The real problem is that most employees are poorly managed. Globally, eight in 10 employees are not engaged or are actively disengaged at work. (In the U.S., it's seven in 10.) These people are either watching the clock or actively working against their employer. And the desire to escape work is symptomatic of unhappy workplaces.

Moreover, given that flex time is the most desired perk among employees, and with the increase in hybrid work models going forward, it makes more sense to use a flex-time model than to legislate hours or days worked -- with an emphasis on upskilling managers to bring role clarity, ongoing coaching and accountability.

If employers focused on improving the quality of the work experience, they could have nearly triple the positive influence on employees' lives compared with shortening their workweek.

The four day work week could work for your organization, but it's not the best place to start: 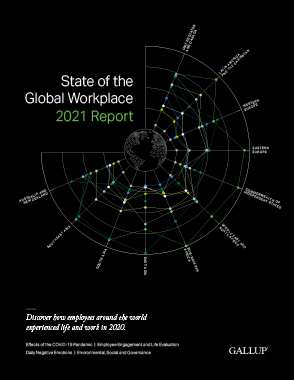 REPORT
State of the Global Workplace: 2021 Report
Discover how the pandemic affected businesses and employees in this report exploring workplace trends, human insights and lessons to lead by.

The 'Great Resignation' Is Really the 'Great Discontent'

Employees Want Wellbeing From Their Job, and They'll Leave to Find It

Employees are re-evaluating their lives -- and their work. Find out what they're looking for.

When employees want to work from home, a generic hybrid model is not the answer.

Creating Your Own Workplace Wellbeing: A Manager's Guide

Before rushing to build team and employee wellbeing, managers should first take steps to bolster their own resilience.