Roche's purpose is "Doing now what patients need next." Roche must be agile to fulfill that purpose, both now and in the future, and their approach to agility is unique -- and uniquely effective.

Clearly, Roche is a global front-runner in pharmaceutical development -- and to be so, the company must be agile.

As Roche's CHRO, Cris Wilbur, explains in the following CHRO conversation, agility is both structural and cultural at Roche. Using typical agility practices but with Roche-built programs -- including a focus on the company's values of integrity, passion and courage -- Roche is seeing enviable speed and accuracy results.

Emond: Agility has a lot of meanings. What is Roche's definition of agility?

Wilbur: We look at agility very holistically. For us, the three primary elements of an agile organization are certainly speed and flexibility, but also stability. Everyone is able to move with greater speed and flexibility when they have solid ground to maneuver from. Because we're 122 years old, many people would say we have a lot of traditional elements that might keep us static. But we have a very clear purpose, "Doing now what patients need next." We are always focused on our patients and our values: integrity, courage and passion. Together they offer stability and enable us to move with speed, flexibility and absolute clarity.

But we also think a lot about mindset. What kind of mindset do people need to do our work? What gets in people's way? So we introduced a program called Kinesis, and I've never experienced a leadership program with such a sticky factor. It's mobilizing the leaders in our organization and the people and their teams to think in a dramatically different way.

Emond: What's the learning format? Is it workshops? Do you come together in small groups?

Wilbur: Our initial target population was approximately 400 leaders and the next layer is about 2,500. We'll nearly complete that in under 24 months. Kinesis sessions go for four days. There's theory, sharing, and a very experiential, very reflective component so people can really understand how this thinking and, ultimately, agile behaviors, manifest themselves in the way that leaders solve problems or make decisions. We talk about what gets in people's way or consumes more energy than it should. To what extent does mindset enable a team to perform at the highest level? And what about the role the leader plays?

And now, because of the success of Kinesis, consulting firms that work across our organization have asked about Kinesis. They said they've never seen this level of engagement; no matter where they go in the organization, people are talking openly about this program and the profound impact it has had on them. It's just a phenomenon they've not seen. And that's another indicator that we hit on something here that is resonating well for our people.

"And now, because of the success of Kinesis, consulting firms that work across our organization have asked about Kinesis -- they said they've never seen this level of engagement …"

Emond: Do you also have the more formal definition of agility that came out of software development, with Agile Teams that do Agile Sprints?

Wilbur: Yes, we have Sprint Teams that use the agile methodology, which is actually quite rigorous. I think that's where companies can get tripped up -- they think they want to apply the agile methodologies, without being as rigorous with it. But we've incorporated the language of sprints to help people think about the work they're doing and what needs to happen for resolution in a significantly shorter period of time.

And as a result of that, things that could have taken eight months to a year are now consuming maybe two to four weeks. It's a way of taking a formal and concentrated look at a topic and saying here are cases where we must be faster, so how do we think and act differently and unconventionally to resolve this problem? Agile methodology is a concrete process, but agility starts with the mindset.

Emond: Okay, so you have a formal and narrow approach to agility, but also a cultural, mindset-driven approach, right? So you can drive the concepts through the organization in such a way that everything everybody does has a certain degree of agility to it.

Emond: Within your own HR organization, is there an example of these approaches resulting in a faster turnaround?

Wilbur: I think it's an approach to use in, for example, any kind of restructuring or reorganization. In general, that's an area in which people have leveraged agility experiences to understand their operating model, how Sprint Teams can change it, and how to include a Sprint Team focus in the organizational construct or setup. The Kinesis program has an exercise in which people imagine something in their organization working in a different way.

This "re-imagining" was an approach that worked really well when we launched Workday in April of this year. To do that, we revisited all of our HR processes, what we call our "people practices," with an agile team approach. We went segment by segment to figure out what's really necessary for us for Workday. Which parts add value and which don't get the outcomes that we want?

We took every single one of our practices through this and then configured that into the Workday system. So in addition to launching Workday, we modified all of our people practices in pieces along the way. We did the entire project in 23 months. When we launched we knew it would not be perfect, and we actively communicated this in the organization. But it's ready to be released and we'll continue to learn and make the necessary adjustments.

Emond: So in a sense, you just waited until all the pieces were done and ready to go. Is that right?

Wilbur: Not exactly. Because as you know, the Workday system is a cloud solution, so it's configurable, but not customizable. And it has frequent updates so you have to get comfortable with a degree of unknown. There were different pieces and parts of it that, of course, we knew we needed to understand. But we moved it to a level that we could be comfortable with by launch. We continue to modify and make adjustments to our configuration, which is something that just wouldn't have happened before. We would have tried to perfect it first, which is likely why, in the past, these kinds of system launches took a very long time.

Emond: So that's agility as a structural approach. How does it work on a cultural/conceptual level?

Wilbur: A specific example quickly jumps into my mind. We have an annual meeting, our Roche managers' meeting, with our top 200 leaders around the world. It's very traditional. Everyone knows exactly how it's going to work: They sit in the audience and take in a lot of information from the stage. But after talking with our executive committee about Kinesis and agility and opportunities to do things differently -- and not just a speed piece, but also the flexibility piece and what we're really trying to accomplish -- our executive committee agreed to approach the meeting in a completely different and experimental way, in a much more agile fashion. The feedback showed it was by far the most impactful managers' meeting we've had ever.

Emond: But when it comes to drug development, which has been a painfully slow process, for good reason, have agile tools, agile approaches sped that process up?

Wilbur: Yes, and for the same reason. In drug development, we're really challenging the way that we thought things could be done. With digital and real world data coming together, we have new opportunities. We were actually able to submit a virtual study that collected real world data for one of our drugs.

Quality can never be compromised, though, and that's where the stability piece comes in. Everything we're doing now is what patients need next, which means there can be no compromise on quality. Our stability and our values have really, really helped us to avoid some of the problems other companies experienced. And compliance is so important for us, so we want people to raise questions. We want people to be challenging. They should challenge the process. But never at the expense of doing the right thing -- and doing now what patients need next with integrity, courage and passion is always the right thing.

Jennifer Robison contributed to this article, which was based on an interview conducted by Larry Emond.

Download the Agility issue of The Real Future of Work. 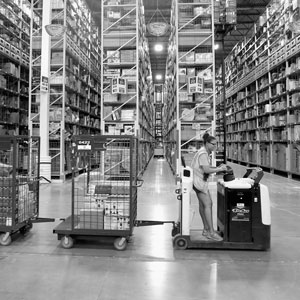 Maintaining a Culture of Builders and Innovators at Amazon

Is Your Company Afraid of Going Agile?

Gain the necessary mindset to make enhancements that will transform your organization.

What Does Agility Mean for Business Leaders?

Learn about perceptions of agility at companies in the U.K., France, Spain and Germany, and why agility is important in order to win in a global economy.