skip to main content
Workplace
What Does Agility Mean for Business Leaders?

Changes wrought by digital technologies and the globalization of markets have come at a breakneck pace in the past decade, forcing businesses to adapt or be swept aside.

"Disruptor" companies have rewritten the rules in major industries like entertainment, transportation and hospitality and are transforming customer relationships in many others, from insurance to apparel.

European companies often find themselves behind the curve when it comes to initiating or capitalizing on these changes. Several countries in Europe -- including the U.K., France and Spain -- are struggling with stagnant labor productivity, in part because they do not have enough "frontier" firms riding the crest of change instead of being dragged along in its wake.

As Airbus CEO Tom Enders argued in a recent editorial, "Europe must nurture its innovation ecosystem" to compete with the U.S. and China.

It's not surprising, then, that "agility" has become a commonly cited business imperative in recent years.

But as the focus on agility -- which began with specifically defined processes for driving incremental software development -- has spread to other sectors, the term has become more ambiguous. These days it often is used as a synonym for more general attributes like speed or adaptability.

Several countries in Europe are struggling with stagnant labor productivity, in part because they do not have enough "frontier" firms riding the crest of change instead of being dragged along in its wake.

Business leaders in Europe need ways to think about agility that are broad enough to apply to their individual needs, but not so broad that they don't lend themselves to specific actions that would better equip their organizations to thrive amid volatility.

They need to consider how their organizational culture, values and mindset encourage employees to act in ways that support agility, and how they should apply the concept to operational strategies for serving existing customers and attracting new ones.

Gallup researchers have studied leadership approaches of companies that have successfully navigated through disruptive change, and how employees' perceptions of workplace conditions differ between those who view their companies as highly agile and those who do not.

The results offer useful insights for leaders seeking to build a greater capacity for agility into their organizations' DNA. 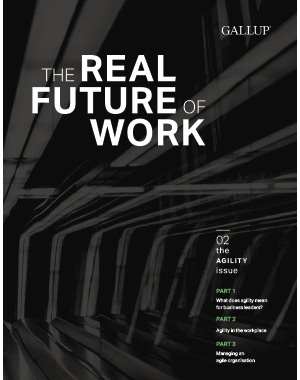 The Real Future of Work

Learn how workforce disruptions are affecting major economies, and what leaders can do about it.

Learn More about The Real Future of Work

What Is the Real Future of Work?

Leaders: find out how the changing workforce affects you -- and what you can do in response.