Gallup recognizes the most engaged workplaces in the world with the Gallup Exceptional Workplace Award. Each winning organization nominates an extraordinary manager to be considered for the Manager of the Year award. Gallup's panel of workplace experts and talent analysts named one winner out of 11 finalists.

Congratulations to the 2021 Manager of the Year: Julio Lopez from The Palace Group!

One conversation with Julio Lopez is enough to feel inspired to go out and learn something new. His enthusiasm for learning, teaching and setting his team at The Palace Group up for success is evident in how he describes his approach to management. He sees everything as a learning opportunity. To Julio, failure is just a misunderstanding that can be resolved by development -- for himself and for his team.

As maintenance director at The Palace at Coral Gables, Julio oversees the maintenance of a 250,000-square-foot assisted living community in Florida with 242 apartments, public areas, a theater, balconies, an outdoor pool and spa, an eight-floor parking garage, and rented retail service spaces. His seven-person team has varying levels of expertise in the different maintenance needs of their building and other Palace Group locations.

"I've always been fascinated by how things work. From a car or a microwave, I'm one of those guys who will either break it or fix it, but I'm going to see how it works," Julio says. "One of my biggest abilities is I wasn't only learning for myself. I am more fascinated in teaching how things work."

Julio began his career in building maintenance before spending time as an independent building contractor. Then he found himself drawn to The Palace Group's mission -- as his own parents were getting older -- and the opportunity to use his skills in a new field to make life better for residents. He started as a member of the maintenance team, but when the maintenance director position became available, he approached the management team to express his interest.

"I said, 'Listen, I can do this,'" he recalls. "'Just give me six months to train myself and get training from you,' and they gave me the opportunity."

It was time well spent. In just three years as a manager, Julio has exceeded retention goals and improved his team's employee engagement scores every year -- achieving a perfect 5.00 in 2020 on the Gallup Q12 engagement survey. His comprehensive preventative maintenance schedule has kept him below budget every year. And it allows his team time to respond to every resident service request within 24 hours -- earning resident satisfaction scores even higher than the company goal of 90%.

In just three years as a manager, Julio has exceeded retention goals and improved his team's employee engagement scores every year -- achieving a perfect 5.00 in 2020 on the Gallup Q12 engagement survey.

His success with employee engagement is rooted in learning, and Julio saw the Q12 as a path to follow. He looked at where his team was already excelling. And he examined where he could break down the questions and individualize the elements to help each team member understand what they need to be engaged at work and why it matters. For example, the team scored low on Q10 (which asks if they have a best friend at work) until he pointed out that a best friend could be the person holding the ladder so you don't fall or the person with a different skill set who is willing to teach you something new.

"If you find what two different things have in common, you can make it work. All you need is the link," he says.

He even brings his team into his management world, creating accountability for the budget by helping each team member see how their choices influence where the company loses money and saves money -- and how that affects the resources available to invest in their team. By sharing ideas and working carefully with materials, they can proactively invest in the future.

The Palace Group leadership team recognizes that one of Julio's greatest strengths is training -- specifically, cross-training. Julio's award nomination mentions the training sessions he leads in which the team members train each other on the skill of the week. "His floor tech has trained the plumber on maintaining the floors, and the plumber has trained the groundskeeper on plumbing," they wrote. "No matter who is on schedule or on vacation, there is someone up for the challenge without disruption to business."

Julio frequently asks his team to shadow third-party vendors to learn -- resulting in fewer calls to outside vendors for his building. His goal is to grow his team members' abilities so that, eventually, any one of them will be able to step into his shoes. He has created a team of confident and dedicated assistants who do exceptional work.

When Is It Going to Be Your Shining Moment?

The coronavirus pandemic caused uncertainty and loneliness for Palace residents and employees alike. Julio and his team answered that call too. They stepped beyond their role as maintenance men into being, as Julio says, "trusted men." The team became a connection between family members and the loved ones they couldn't visit during lockdown. They began doing video calls with family while they were working on jobs, taking pictures of them and putting furniture together. They became a lifeline during uncertainty.

Julio knows that even small gestures can have big rewards. Many of his team members were isolated from family outside of the U.S. He supported their wellbeing in a difficult time by sharing apps and ways to communicate. For him, silence is not an option.

"Sometimes what you don't understand, you're afraid of, and I give them the green light that whatever is bothering them to share it with the team," Julio says. He created group chats and put a suggestion box out to encourage questions and share ideas. 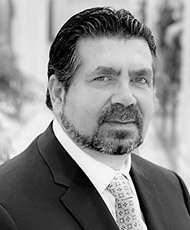 The Gallup Workplace Awards: 2020 Manager of the Year

Meet the recipient of Gallup's 2020 Manager of the Year Award: Daniel Chambers from White Lodging.

Do Your Managers Lack Courage?

It takes courage for managers to face the people above and below them with honesty and conviction. Learn how to cultivate high-courage managers.

Why Managers Need Leadership Development Too

In the changing workplace, a manager's role is far more than supervisory. Is your organization underinvesting in their leadership development?