The number of publicly listed U.S. companies traded on U.S. exchanges has been cut in almost half in the past 20 years -- from about 7,300 to 3,700 -- which goes to show that mergers and acquisitions are still a primary growth strategy.

In fact, 2018 looks to be another banner year for mergers and acquisitions, especially in tech, finance and healthcare.

The CHROs of some of the biggest companies in the U.S., Europe and Asia tell me they expect to spend a good bit of 2018 navigating the tricky terrain created by inorganic growth. And not just their own growth.

Even if their company isn't involved, mergers can impact entire industries. The CHROs I've talked with are already preparing for how that will affect their human resource departments.

CHROs are smart to think the way they do. Not just because they're seizing on the opportunities that a merger offers, but also because they're recognizing what it really offers: the chance to build a new workplace culture.

The best CHROs know what they want their culture to look like post-merger.

But some powerful CHROs are admitting, very quietly, that they're not sure how to achieve the post-merger culture that they want.

Though the term is used all the time, actual mergers in a financial sense are kind of rare.

In most merger situations, one firm acquires another. That leaves CHROs with a choice: subordinate the newly acquired company or integrate it.

And as arduous as the merger process is, integrating two companies is much more difficult, especially when the goal is to create a new and better culture.

There isn't a single, magic hack for integration and culture change. But there are principles that the best CHROs I know have adopted early in the merger process to support culture development plans through the tricky early days, and to reinforce that vision later when the dust has cleared:

1. Understand that people are the most important financial lever in any organization.

The process of negotiating a merger puts every financial asset and deficit on the table, except the one that can't be categorized: human will.

If sensitivity to the employee experience is built into the process from the beginning, workers are likelier to provide the enthusiasm and goodwill that boosts productivity and profitability.

In the early days, when everything is spelled out and double-checked, it can seem as though all decisions are in alignment.

But culture is fluid and can be unpredictable.

Executives who align their expectations about culture, aspiration and norms will be able to make better business continuity plans early on and make faster non-spreadsheet decisions later.

CHROs can help by spelling out cultural issues that would otherwise be overlooked or left ambiguous.

Putting numbers to hard-to-measure issues, such as the extent to which new coworkers are disposed to learn from each other, seems too difficult to attempt. Some companies don't bother.

The trick is to determine what causes or prevents the thing that's hard to measure, not the thing itself.

For instance, determine the extent to which people are excited about learning new ways to do their jobs.

You might have noticed that these principles all center on people.

That's because integration is a human endeavor.

To succeed in building a new culture from an integrated -- not subordinated -- workforce, CHROs must define what they need from people and know how to get it.

Again, this isn't a magic hack to early-stage culture building. It's just hard-won insight into the groundwork CHROs can lay to make integration and culture change more successful later on.

Gallup can help your organization manage culture change during mergers and acquisitions:
• Watch this free, on-demand briefing to learn how to build a strengths-based culture.
• Understand employee sentiments during times of culture change with Workforce Analytics.
• Build a successful culture following a merger or acquisition with Gallup's help. 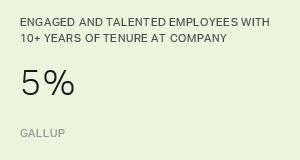