In Ohio alone, 257,000 manufacturing jobs have been lost since 2000. An analysis by The Columbus Dispatch shows half of Ohio's workers -- 2.5 million people -- are likely to be replaced by technology.

No question, automation will put millions of people out of work. It already has. But it will also open millions of new jobs. CompTIA's industry analysis says Ohio gained 3,000 tech-sector jobs in 2017 alone, with more to come.

So in macroeconomic terms, job losses and gains may well even out over time. But in microeconomic terms -- very micro, down to the individual -- people are being forced to reorient and rediscover themselves for the future of work.

But for people making life-altering career decisions in a changing labor market in the midst of a baffling economy, "reorient yourself" may not sound like advice. It may sound like a threat. At the same time, 23% of workers are worried about losing their jobs to AI, according to a Northeastern University/Gallup poll, and 58% of Americans say AI is a bigger job threat than immigration or offshoring.

Due to automation, people are being forced to reorient and rediscover themselves for the future of work.

People are scared -- and not just in the Rust Belt -- but there are three things they should keep in mind as they reorient themselves for the future of work:

We're all born with certain innate patterns of thought, feeling and behavior. Those traits -- Gallup calls them talents -- are what CliftonStrengths assesses and explains. If you learn how to productively apply those talents, you can turn them into strengths.

And when people work with their strengths, their performance explodes.

That enhanced performance is vital to business outcomes. So when workers capitalize on their strengths, they're actively using an asset that can't be duplicated by a robot.

Take the CliftonStrengths theme of Relator, which Gallup defines as a deep-seated comfort with intimacy.

"Once the initial connection has been made, you deliberately encourage a deepening of the relationship. You want to understand their feelings, their goals, their fears and their dreams; and you want them to understand yours."

When workers capitalize on their strengths, they're actively using an asset that can't be duplicated by a robot.

Or the theme of Responsibility, which:

"…forces you to take psychological ownership for anything you commit to ... This conscientiousness, this near obsession for doing things right, and your impeccable ethics, combine to create your reputation: utterly dependable."

Those two and the other 32 CliftonStrengths themes are innate to some employees, some customers -- and no machines.

So when all AI is equal, companies that best deploy human talents in the service of the organization's purpose, customer promise, product development and brand have a serious competitive advantage. They'll have a performance advantage, too -- if their workers use their strengths at work.

When all AI is equal, companies that best deploy human talents in the service of the organization's purpose, customer promise, product development and brand have a serious competitive advantage.

The productive use of strengths is most likely to occur when managers match strengths to the role. And if a manager skates over strengths, employees will have to learn their strengths on their own and should teach their boss what they learn.

Helping your boss learn how to help you do more of what you do best and position you so that you can do it may seem more like a luxury than a necessity in the Rust Belt, where so many jobs have disappeared.

Any job seems better than no job -- even a job that neglects your strengths.

In the near term, maybe. But in the long term, people who are concerned about the rise of automation need to be better at their jobs, better at leveraging what makes them distinctly human and better at creating value.

Using your strengths accomplishes all three.

Gallup recommends that managers have frequent coaching conversations, not annual reviews, and that those conversations focus on strengths. Ideally, leadership should teach managers how and why to coach about strengths. But if leaders don't, and if managers don't know how to, individual contributors should take the lead on strengths.

People who are concerned about the rise of automation need to be better at their jobs, better at leveraging what makes them distinctly human and better at creating value.

That's not the ideal approach, though, because it neglects the performance potential of all the other workers.

Better by far is a people management strategy that leverages the strengths of the entire workforce to drive the whole company's business outcomes.

And truth be told, the Rust Belt is historically bad at that.

For over a century, companies made fortunes without having to care too much about their workers' performance potential.

Ohio alone is home to the invention of everything from the airplane to the pop-top can, and there was such endless opportunity in the industrial Northwest and Midwest that businesses didn't have to care about good people management, innovation or productivity to be successful.

And in general, workers didn't have to worry much about their job prospects, either.Jobs were plentiful, paid well and local communities often provided psychological security and community well-being that the workplace didn't.

Those days are gone, and the day of AI is here. Is the Rust Belt ready for it?

Some places are. Some people are.

But ready or not, the future is here. The workers who want to face it head on, with every advantage they can muster, should learn their strengths.

Remember those 3,000 new tech-sector jobs in Ohio? Many require specialized technological knowledge for building and running tech-driven products -- but every single one of those jobs requires human ability and human management to create a product for a human customer.

And every one of those humans has innate strengths. Strengths, not tech, is the key to performance and growth in those jobs.

And if a manager doesn't understand how to wield strengths as the key to growth, the individual worker needs to own that. Strengths are the advantage workers need in a disadvantaged economy -- and they're an important part of creating a booming economy, too.

Even if your company's not on board, knowing your CliftonStrengths can help you stay employable no matter how bad the economy gets. 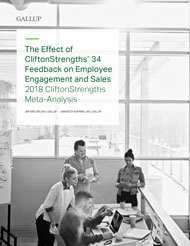 Download this study to learn more about the effect of CliftonStrengths 34 feedback on employee engagement and sales.

Download this study to learn how strengths-based development using the CliftonStrengths assessment is related to key organizational performance outcomes.