Everyone knows that Southwest Airlines is special. It's the airline with the fun flight attendants, open seating and the big striped heart by the door.

Hardly anyone knows that Southwest is on its way to becoming the first strengths-based airline in the world.

It all started with a chance conversation that Kay Weatherford, Southwest's VP of revenue management, had a few years ago with Anne Murray from the marketing department.

"She had been using a strengths approach for a while inside and outside of work, and I had been wanting to offer my leadership team more personal development," Weatherford said. "When you lead people, it is so helpful to understand who your employees are. CliftonStrengths allows you to communicate with them better, to understand who they are, to help value them. It just felt natural."

Weatherford felt so strongly about the potential of a strengths-based approach to employee development that she saw it as a tool of organizational health and dedicated some of her department's resource time to it. "It gives us a way to recognize the different strengths we all bring, to understand who we are and value what everyone contributes," she said. "People started talking about it, then other leaders realized that the strengths-based approach was very well-received and reached out to us to find out more."

Along with the marketing department, revenue management's focus on and successful use of CliftonStrengths was one of the catalysts for a wider strengths-based approach, which spread throughout the organization -- changing the way Southwest employees see themselves, enhancing the way they work and becoming part of Southwest's Servant Heart (which is what that striped heart symbolizes). And along the way, becoming more aware of her strengths helped Weatherford too.

Weatherford had been Southwest's VP of revenue management for two years before she heard about CliftonStrengths and Gallup's strengths-based approach, and she had served in other leadership roles before that. As an experienced leader, she understood that helping employees know themselves better is also a way to grow as a leader. In fact, Weatherford believes helping employees develop individually and improving team and cross-department relationships is a primary leadership responsibility. "If your relationships are strong," she said, "you can just get more things done. Doing business is easier!" That's one of the reasons she introduced CliftonStrengths and the strengths-based approach to her own team.

Even so, there were some things that Kay Weatherford didn't know -- about Kay Weatherford. "In one of my strengths coaching sessions, Dr. Brim [Gallup Executive Strengths Coach Brian Brim] told me I'm the kind of person who, more than most, thinks other people think the way I think," Weatherford said. "I didn't know that was unique about my combination of strengths. It was an aha moment, and I realized I better tune in to it."

Brim sees that reaction all the time -- he wrote about it extensively in his book Strengths Based Selling -- and understands it well. "People live so close to their own strengths that they often don't realize how unique they really are," he said. "That's why they're so surprised when I tell them no one thinks, plans, executes, influences, motivates, develops, builds relationships or many other things the way they do."

If people assume their strengths are just the human default setting, they may not see those strengths' practical use or even realize their impact. But now, Weatherford does. She delved into her top five strengths -- Arranger, Developer, Maximizer, Positivity and Belief -- and, through coaching, began to understand how they could influence her leadership to have greater effect. "Strengths coaching is a way to hold up a mirror to people in a way that they can really see their uniqueness," Brim said, "and learn to honor and apply it more in their personal journey."

Weatherford's journey brought her to an insightful discovery -- mismanaged strengths can have almost the same effect as non-strengths. "I quickly realized that my strengths could also be a hurdle if I use too much of them," Weatherford said. "It made me more aware of how I manage myself. I think that's made me more comfortable and confident as a leader."

That's partly because she's using her talents with more precision, she said, but understanding the totality of strengths helps her coach other people more holistically as well. She knows when people are using a strength ineffectively, or when they're leading with a non-strength and need to reassess.

"People live so close to their own strengths that they often don't realize how unique they really are."

In fact, when Weatherford "tuned in" to that aha moment, she found an insight that she shared with other leaders to solve a familiar problem: coaching an employee who works hard and does well but doesn't quite reach excellence, or at least not consistently. When Weatherford sees that dynamic, she knows that employee's talents probably aren't being applied effectively -- either the wrong strengths are being used, or the right ones are being used too much.

"So I try to point out opportunities and strengths, and I set up career checks in the conversation -- what are you thinking about doing in the future? Where are you heading? What are you feeling comfortable with? What are you not feeling comfortable with?" Weatherford said. "That sometimes can open the door to self-awareness. People can do well if they actually understand their strengths and what they're not great at. It's just the key to your development. It can also help leaders build their teams -- if you know everyone's strengths, you can fill gaps."

Sometimes that helps employees take a new approach to their role, and sometimes it leads them to a new role altogether at Southwest -- usually a decision reached by employees themselves.

And all leaders know a decision like that starts with a conversation that may be tough for the employee and for the leader -- but Weatherford says there's consolation in knowing that great workers may be leaving her team but staying in the Southwest family (which is typical, as Southwest has low turnover). And the "common language of strengths," as Weatherford puts it, makes those conversations much easier to have.

"People are different. They just come from different places. We all have different strengths," Weatherford said. "If we both know and understand your strengths and how they can get in your way, you can figure out where you should head in your career. I honestly wish I had come upon this when I was 18."

A Legacy of Service

Strengths-based leadership has been part of Weatherford's approach for such a long time that it doesn't feel new anymore. According to Weatherford, even when it was new, it fit right in. Herb Kelleher founded the company with the belief that respecting and valuing employees is a fundamental business practice. "Using a strengths-based approach naturally supports that vision because it's all about honoring people as individuals," Weatherford said. "Herb used to say you treat your employees right, you value who they are, you respect them -- and, in return, they will work hard for you and treat customers the way they're treated themselves."

That, as it happens, is the purpose of the big striped heart by the door on Southwest planes. Customers find it all over the place -- on their pretzel bags, their ticket envelopes, their drink coupons -- but Southwest employees know that symbol has a particular meaning: Treat others with respect, follow the Golden Rule, and put other people first. A customer sees a symbol, but an employee sees a values system.

"It's all about honoring people as individuals."

Weatherford believes CliftonStrengths is part of that values system. She came upon it accidentally and she and her team helped it spread organically, but it fits and always has. "When you recognize that you are who you are, when you name it and claim it, it just feels right," Weatherford said. "From the beginning, I felt it was the right thing for me, for our department and for our company. But it's not new news. It's just a different tool to continue what we originally started."

Lead with strengths. Empower your employees to succeed.

Kelly Bacon is a Partner at Gallup and leads our Transportation Division.

Learn how Southwest has become the world's first strengths-based airline. 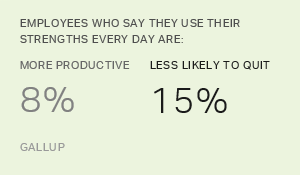 Strengths-Based Cultures Are Vital to the Future of Work

Going With the Flow: What It Means to Be "Strengths-Based"

Join Dean Jones as he addresses your CliftonStrengths questions, including how "flow" is integral to understanding what it means to be "strengths-based."

Learn how Stryker uses their strengths to stay ahead of the competition.